"How do I get my child to practice?" - The story of Jack and the electric guitar. 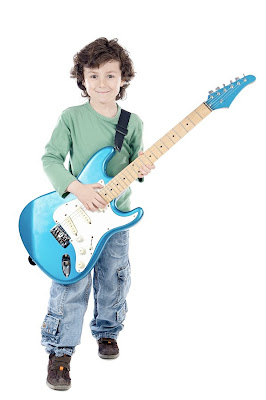 A common question from parents is "How do I get my child to practice?" Probably the best answer is to use an example.

My most recent story involves a 10 yo boy Jack who was learning with me and was simply not practicing. Each week he turned up and made excuses like how his guitar was out of tune so he couldn't practice or his Mum forgot to remind him and so on. I am sure he had a copy of '1001 excuses for not practicing'. At this point I knew it was time to come up with a plan.

Next I sat down with Jack and his parents and asked Jack how much he really wanted the electric guitar. As expected his answer was "More than anything in the whole world". I then said "Jack I have spoken to your parents and they are going to take you to the guitar shop so you can pick out an electric guitar". You can imagine how excited he was at this point. I then said "Here is the deal. When you have successfully completed Level 1 of the G4 GUITAR Junior Checklist your parents will buy you the guitar. If you practice for 20 minutes a day between now and Christmas you will be playing your new guitar by Christmas Day".

Jack agreed and we got to work. From that day on Jack practiced everyday often for more than 20 minutes. I told Jack that if he did an extra 5 minutes a day he might even get the guitar before Christmas. As a result Jack completed Level 1 in record time and his new electric guitar was in his hands by the end of November. But best of all Jack now had a positive association to practicing. Jack loves practicing and is a confident guitarist.

If your child is learning guitar and not practicing or making no progress please don't give up. Send me an email and together we can work out a strategy. Email me at david@g4guitar.com.au